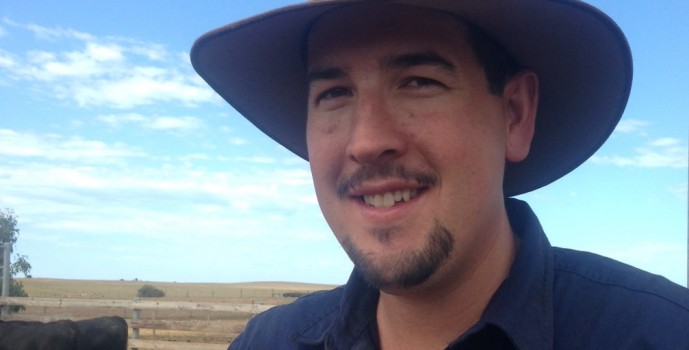 Peter grew up in the Cooke Plains, Coomandook area on a continuous cropping and sheep farm.

He became interested in Beef production at the age of 14 and by the time he was 16 Peter had started his own South Devon stud which he pursued as a hobby for 8 years.

In 2004 Peter completed an Advanced Diploma of Agriculture at the University of Melbourne’s Longerenong campus near Horsham in Victoria.

In 2008 and 2009 he spent 20 months on an International Agricultural Exchange program spending 12 months on a cattle ranch near Vetran in Alberta Canada and 8 months on a veal farm near Store Hedding in Denmark.

In 2010 Peter started working at Naweena Investments at Padthaway as a senior stock man, where they ran 2000 Angus breeding cows plus replacements with Autumn and Spring calving, producing 480kg to 550kg finished steers off grass and artificial inseminating around 700 heifers a year.

He took part in the purchasing of bulls from Stoney Point, Coorong Designer, Coolana, Barwidgee, Serita Park and Weeran.

In 2014 Peter began working for Garry Hardwick (Hardwick’s Meats) as an overseer at one of his Keith properties, running 500 breeding cows and 1400 ewes. He continued to purchase bulls from Stoney Point.

Peter has always been interested in genetics and the selecting, breeding and production of bulls and females to suit all markets of the ever changing and diverse cattle industry.